Arbikie aims to produce two versions of Rye Whisky, one in line with the Scotch Whisky Regulations being called Scottish Rye Whisky and a second version being an American version using traditional techniques used in the US.

The first 100* bottles now being released adheres to the Scottish traditional distilling techniques. All proceedings from these first first bottles will go to the of Euan MacDonald Centre towards research of Motor Neurone Disease.

When Arbikie releases their Scottish Rye Whisky, we?re guessing in 2018/2019, it will be the first time in 200 years a whisky has been made from rye.

The Arbikie Highland Rye can be bought from their homepage 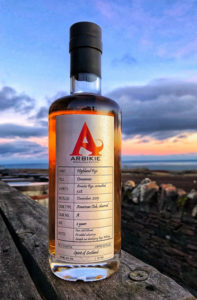